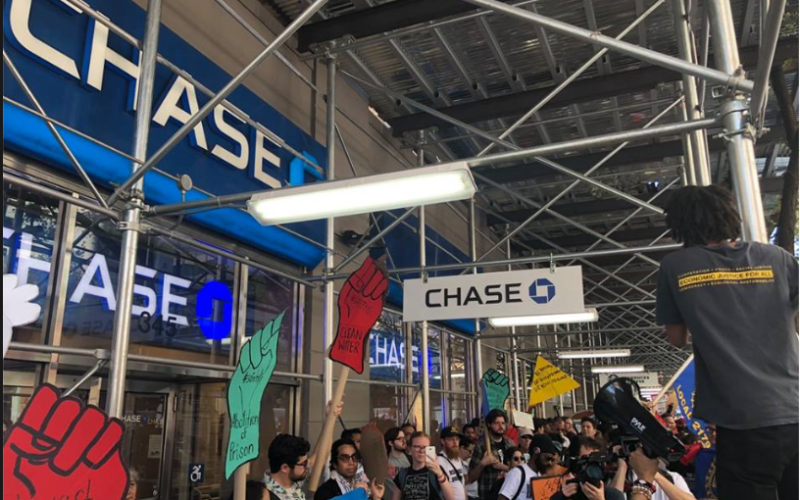 At a rally in front of the New York Stock Exchange, the Public Bank NYC coalition pressed New York City to divest from Wall Street banks that are harming New Yorkers and New York neighborhoods, and financing climate change and environmental devastation, private prisons, and more. More than two dozen groups endorsing the campaign are calling on the City to establish a public bank that would invest in sustainable, community-led development, as a strategy to advance racial, economic, and environmental justice in New York City.

A Flatbush resident fighting for affordable housing, a student struggling to afford college bills, and an organizer fighting for immigrant worker justice shared personal stories—highlighting how banks with which New York City does business have harmed them and their communities. A group of leaders from worker-owned businesses, community land trusts, and financial cooperatives described how a public bank can support locally-based initiatives and promote neighborhood equity.

“With the Trump Administration and Congress handing out massive corporate tax breaks, rolling back federal financial reform, and gutting the Consumer Financial Protection Bureau, Wall Street is heading straight for another crisis,” said Deyanira Del Rio, Co-Director of New Economy Project. “A public bank will allow New York City to deposit our public money with a bank that belongs to New Yorkers and is expressly chartered to serve the public interest—as the City in turn divests from Wall Street banks that are actively harming New Yorkers, our neighborhoods, and the planet. We are excited to bring New York City into the growing national movement for public banking.”

“My rent has nearly doubled over the past few years, and many New Yorkers like myself are one bad month away from being on the streets,” said Winsome Pendergrass, a resident of Flatbush, Brooklyn, and member of New York Communities for Change. “Every year New York City pays millions of dollars in fees to Wall Street banks, while these same banks are extracting wealth from our communities, buying up our neighborhoods and driving gentrification. We need a public option. New York City should create a public bank to keep wealth in communities and invest in real, long-term affordable housing.”

“As long as the city continues to deposit its money in prison financiers like JPMorgan Chase, we will remain complicit in systems of oppression that profit off of incarcerating our communities,” said Bamsa Eid, lead trainer with Enlace. “It’s time New York City puts its money where its mouth is, divests from Wall Street, and – through a public bank – invests in us.”

“Here’s the deal: New York City currently deposits billions of public dollars in the big Wall Street banks,” said Stephan Edel, Director of New York Working Families. “These bankers make millions off these deposits and high fees, while providing little benefit to the City, small businesses, and residents of New York. Our money should be put to use in our communities. Keeping New York’s money at a public bank makes our finances more secure and transparent, saves taxpayers money, and increases the availability of credit to local businesses and affordable housing development.”

“Everyone knows that big banks and Wall Street investors are some of the biggest drivers behind gentrification, displacement and homelessness,” said Scott Hutchins, member of Picture the Homeless. “So why should they benefit from billions of dollars in business from New York City? New York deserves a public bank that will invest in community needs, and be accountable to New York City residents—one that will prioritize, housing, not warehousing, and not prey on low-income New Yorkers.”

“New York City must invest in local communities and communities of color, rather than allow Wall Street to exploit them for its own gain, bolstering the racial injustice and inequality that is prevalent in our City,” said Bertha Lewis, President and Founder of The Black Institute. “With the news that big banks are once again getting the green light to do whatever they want with no restraints — no Volcker Rule, no Dodd Frank — the need for a public bank that will be by and for the people is more important than ever before.”

“By making financing accessible to worker cooperatives and other community wealth-building institutions, a New York City public bank could save jobs, build wealth in our struggling communities, and help to build a just economy that works for all,” said Scott Trumbull, Director of Programs at The Working World.

“There is a great need for affordable capital and credit in poor, immigrant and working class neighborhoods in New York City,” said Alpha Amadou Diallo, executive director of Pan-African Community Development Initiative. “A public bank could support community-led development, stem disparities in access to capital and ownership of resources, and integrate our immigrant communities into the mainstream economy.”

“A public bank would protect public deposits and reinvest in communities like ours in the Bronx, where there are few banks and many residents are unbanked or underbanked,” said Jumelia Abrahamson, Director of Northwest Bronx Resource Center with University Neighborhood Housing Program (UNHP). “A public bank could support affordable housing and community development financial institutions, including those that help families achieve housing and financial stability.”

“Wall Street investors and big banks know that they can profit from privatizing essential resources like clean drinking water,” said Nisha Swinton, Northeast Senior Organizer with Food & Water Watch. “These institutions bankroll the pipelines and fracking operations that threaten a livable planet. The fight for environmental justice is a battle to place human needs above private profiteering, and that requires getting public funds out of fossil fuel projects and building a sustainable future built on public banking.”

At the rally, attendees chanted, “Wells, Chase, B of A, public bank’s a better way!” Organizers staged a game show spoof, Wall Street vs. Families Feud, in which a New York family faced off against Wall Street executives.

The campaign, which kicked off on the day the New York City Council is slated to adopt the City’s $89 billion budget, will be rolling out a series of actions and events in all five boroughs and engaging elected officials and other stakeholders in the coming months.