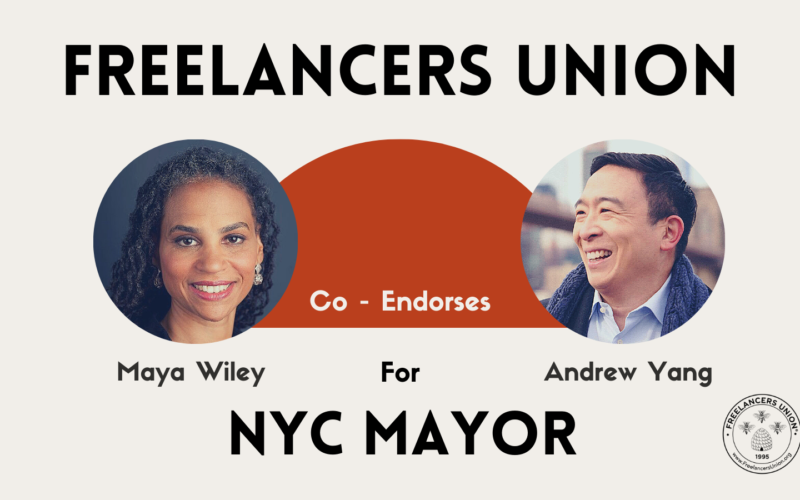 This year’s NYC elections could have unexpected outcomes thanks to the roll out of Ranked-Choice Voting which allows voters to rank multiple candidates by their preference, rather than choosing just one. Ranked-Choice Voting has opened the door for unions to back multiple candidates in the same race, with Andrew Yang and Maya Wiley picking up the endorsement of Freelancers Union.

Approved by a 2019 ballot measure, 73.5 % of New York City voters voted yes for this new system which is intended to ensure the winning candidate has the widest base of support, as well as eliminating the need for costly and time-consuming runoff elections.

Yang, the entrepreneur and Wiley, the racial justice and equity advocate picked up the union’s endorsement after they vigorously vetted mayoral candidates and polled their membership citywide. Freelancers Union president, Rafael Espinal said their members are desperate for leadership that understands the needs of freelancers, especially now as they go through the biggest financial crisis the workforce has seen.

“Andrew brings desperately needed ideas, and a fresh perspective, of how to build a support system for the city’s creative workforce. Maya has an understanding of the policy changes that are needed to ensure freelancers have legal recourse for the issues they face,” Espinal said.

The union’s president also said that their endorsement can help these two candidates’ chances of winning the election. “We represent a workforce of 1.3 million New Yorkers. Our membership resides in all five boroughs. Our job is to make sure they go out to vote and vote for the two candidates we believe will have freelancers’ needs at heart. If Freelancers vote as a block, we can dramatically change the course of this election.” Espinal stated.

Ranked-Choice Voting, which will be used in NYC local primaries and special elections this 2021, gives voters more choice than ever before, to rank up to five of their favorite candidates. All first-choice votes are counted and one who receives 50% plus 1 wins. If not, it goes to round two and the candidate with the fewest votes is eliminated, and voters who picked that candidate as ‘number 1’ will have their votes count for their next choice.

As Freelancers Union president, the former NYC Council member said that Ranked-Choice Voting can change the outcome of this mayoral election because it will allow all voters to participate on who ultimately wins in the end.

“Historically, when a mayoral candidate did not get over 40% of the vote there was a runoff election scheduled weeks later with the top two candidates. In those elections, voter participation fell off dramatically. Now with one vote, and the ability to rank, in the end we will see true representation of New Yorkers favorite candidate winning the election,” Espinal stated.

Although most politicians and unions are well versed with Ranked-Choice Voting, most New Yorkers like Robert Gilmore, a BRIC employee in East New York, Brooklyn had no clue what it is. “What’s that? I’ve never heard of it.” Unlike Gilmore, Tanisha Donald, a Dental Assistant in Brooklyn who just learned about it said it has its pros and cons. “It is good because it gives people more opportunities to win, but then again, it changes things a little bit because instead of voters focusing on one person, they are focusing on five,” Tanisha said.

James Mongeluzo, a NYC employee who is well-informed on the system said it’s a better way to vote unlike in the past where the system allowed people to win with a small percentage of votes. “When you have the rounds, you have a better idea of the person who has a broader base of support. I think it will change the outcome of elections. There are some people who won races in the past that they wouldn’t have won if this system was in place.”

Though Ranked-Choice Voting is new in NYC, 21 cities around the country are already using it. New York City will use it for Primary and Special Elections for Mayor, Public Advocate, Comptroller, Borough President and City Council Elections.

I reached out to Yang’s and Wiley’s campaigns for comment on their endorsements but neither campaign has gotten back to us before the deadline.