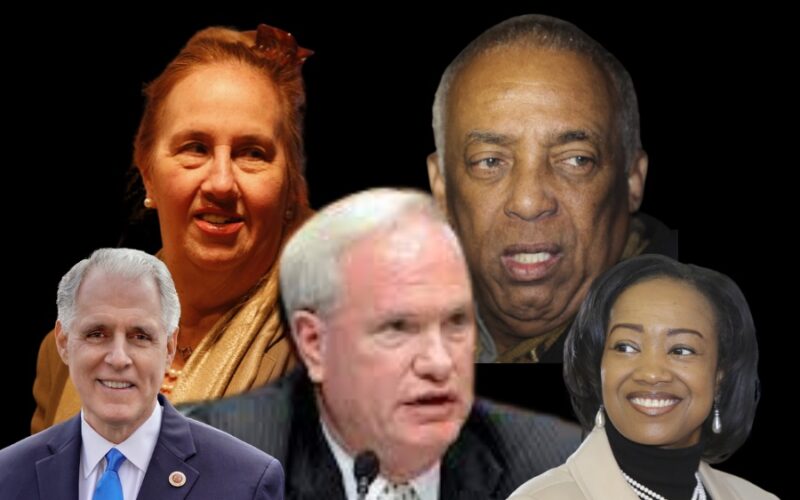 Term Limits are meant to restrict the number of terms for those in elected office, but that is not the case with New York City’s term limits law. An article in the law allows City Council members who have been term limited to run again after sitting out for four-years. This has paved the way for former Council members Gale Brewer (District 6), Charles Barron (District 42),  Tony Avella (District 19)
James Gennaro (District 24) and Darlene Mealy (District 41) to run again for their old seats in 2021.

Gale Brewer became Manhattan Borough President after 12 years in City Council from 2001-2012, which included a 3rd term when Bloomberg extended his term from 2008-2012. After being Borough President for 8 years, she is term limited out. Now, she is running again to try to take back her old District 6 City Council seat.

Although some are raising eyebrows about the term limits rule, Brewer who was against Bloomberg’s 3rd term says she does not support term limits, especially 8 years. “The minimum for City Council should be 12 years. This is a large city, only the budgets of the US, CA and NYS are larger than NYC; we are bigger than all other states, as a city. It takes 12 years for an individual member to pass meaningful legislation,” said Brewer. “I passed Paid Sick Days and the Open Data Bill, two legacy bills, in my 3rd term,” Brewer stated.

Unlike Brewer, Charles Barron, another former City Council member also running again for his old seat in District 42 said he supports term limits and former members running again after being term limited. “I feel that it’s good in the sense that you can have a change in leadership. I don’t mind leaders being around that are effective but sometimes leaders who are ineffective have been around for a very long time. So I have no problem with me being term limited out and they say you can wait for another term or two and you can run again,” said Barron.

However, Brewer’s and Barron’s opponents all support term limits. “Term limits level the playing field and create opportunities for more New Yorkers to have a seat at the table. I agree with the overwhelming majority of voters that 8 years in one office is enough,” said Jeffrey Omura, an actor, activist and labor leader running against Brewer in District 6.

Apart from bringing in fresh ideas and tackling the burning issues in the district, Nikki Lucas, an activist and the leading candidate running against Charles Barron in District 42 said, “we have to look at how Charles Barron is attempting to upend the entire concept of term limits.”

Lucas added, “He went against Michael Bloomberg for extending term limits another 4 years when he was the NYC mayor. While Charles said he was against Bloomberg getting an extra term, he also benefited by being in office an additional 4 years in City Council. Barron then went to the State Assembly and his wife, Inez, took his place in City Council. Now that she is term limited out Charles is attempting to go back to City Hall. This madness has to stop. They think East New York is their own little family business, while the community is in a constant state of suffering. East New York is number one in homelessness, number one in police brutality, number one in gun violence, at the bottom in health care, at the bottom in education, last in technology and at the bottom in small business development under the Barrons over the past 20 years. How much more damage do they want to do to the community?”, said Lucas.

Lucas said that the idea isn’t for you to move on for a term and then come back at some later date. Only a few politicians are trying to take advantage of this loophole and Barron is one of them. But Barron, who currently represents the 60th District in the NY State Assembly said it’s not a way to get around the term limits rule.

“This is not getting around the law. This is what the law says. So it’s not us trying to get around anything. This is the term limits law. And I support that law that allows people to be term limited from office and stay out for a term or two and then run again and I especially support us running because we are unique in this space,” said Barron.

Touting their achievements in East New York, Barron said they look at it quite differently. That their journey is to do whatever they can to maintain and get more black, radical revolutionaries elected to office.

Although Barron touts the achievements of him and his wife, Inez Barron, she is the only lawmaker in NYC to make the list of 5 Worst Lawmakers in City Council both in 2017 and again in 2020, by City & State. According to an article in East New York News, the divisiveness of the Barrons has hurt the East New York community and the article goes on to say that they are playing a dangerous game of politics in a community that is suffering.

Charles Barron and his wife seem to be a duo that is taking advantage of the system more than others, as they have kept the East New York City Council seat in their one family for the past 20 years. Lucas says East New Yorkers are going to finally have a chance to put an end to family legacy politics in the community. “We are finally going to move East New York into the 21st Century”, stated Lucas.

Another race with a term limited candidate returning is in District 41 where incumbent, Alicka Ampry-Samuel is facing Darlene Mealy who was term limited in 2017 and now wants back her old seat. While noting that Mealy voted to extend terms to three four-year terms, Ampry-Samuel, who first ran and lost against Mealy in 2005 said, races are healthy and public records show that she is the better candidate here.

“If someone else thought they could do a better job than me, then may the best candidate win. I believe in the democratic process, but I do not believe in dynasties or monarchies. Term limits are important. I’ve done more in my three years than my predecessor did in an entire twelve. My predecessor 3 pieces of legislation in twelve years and I have passed 13 in three years. Her record on bringing resources is just as dismal compared to mine,” said Ampry-Samuel.

Ampry- Samuel said she doesn’t agree with running for the same office after being term limited out years before.

But Brewer said she hopes her experience can help implement and oversee policy that truly helps individual New Yorkers especially in this pandemic. When asked why she’s campaigning to return to the Council, instead of running for Mayor, Brewer responded, “there will be 35 new members of the City Council and my skill set will, I think, help us to focus on achievable outcomes that give good jobs, affordable housing and better schools and health care to New Yorkers. I know how to avoid past mistakes.”

But David Gold, a former litigator, life-long Upper West Side resident and one of the four candidates running against Brewer said his district and the City are hungry for new ideas and approaches, and Brewer’s pseudo-incumbency is a disadvantage. “The most often-heard argument against term limits is the value of experience, but there’s little evidence that career politicians make better legislators. In my District, we’re grappling with mostly the same problems Brewer has been failing to solve for 20 years,” Gold Said.

Lucas, who has outraised Barron and has been endorsed by the UFT, the CSA, Congressman Hakeem Jeffries, Senator Roxanne Persaud and others said East New York voters want term limits because they don’t want politicians to stay in power forever. “Allowing politicians to remain in office for 20 and 30 years breeds eventual corruption, greed and power hunger, of which none of these qualities helps residents in any community,” Lucas said.

Barron, Mealy and Brewer are not the only term limited candidates eyeing their old seats. James Gennaro, a former term limited member of Council District 24 in Queens came back and won the special election to replace Rory Lancman who resigned to take a position within Governor Cuomo’s administration. Gennaro who occupied the seat from 2001 to 2013 and was forced out by term limits, is now running to maintain it when he finishes serving Lancman’s term come December 31st, 2021.

Tony Avella is another former term limited Council member looking to get his old job back. Avella is running for his old seat in Council District 19 in Northeast Queens. He was Councilman from 2002 to 2009, ran an unsuccessful bid for mayor in 2009, and then ran for Senator in District 11, unseating longtime Republican Senator Frank Padavan. After losing his bid for re-election, Avella now wants to take back his old Council seat.

Avella has tough competition with Richard Lee and Austin Shafran both slightly ahead with funds on hand, according to the latest Campaign Finance Board filing.

While all the candidates we spoke to agree that there is a loophole in the term limits law, they have different views on who should decide on any change on that article of the law.

While Lucas wants the law changed so that once people are term limited out, they are not allowed to run for that seat ever again, Sara Lind, an attorney, political activist and member of Community Board 7 running against Brewer said its’s up to the voters to decide. Lind, who is running for office for the first time got a surprise endorsement over Brewer from The Jim Owles Liberal Democratic Club, a prominent progressive political club that focuses on LGBT issues.

Brewer, who has since demanded a revote to revoke Lind’s endorsement in her favor said the issue of term limits was on the ballot for New Yorkers to vote on; any change would have to go back to the voters.

Meanwhile, Omura, an advocate for workers’ rights said we are stuck with the rules that we have, and it’s up to the voters to decide what they are looking for in their next generation of leadership. “I’m always open to having a conversation about what systems and structures are best suited to ensure that our city government is representative of the people that it serves. I would support bringing another referendum to the voters to clarify the city’s term limits rule,” said Omura.

Ampry-Samuel said people have taken advantage of this loophole and it should be closed because there should be at least one more capable person to carry the baton for a community after 8 years and especially after 12 years. “If people aren’t stepping up then we should ask why? If a leader isn’t directing and mentoring the future to lead, then they aren’t really serving the community. They’re serving their own ego,” said Ampry-Samuel.

Meanwhile, New York City voters are also voicing their thoughts about the term limits law. Timothy Hunter of Brooklyn says term limits are important because it ensures that everyone else gets a chance to participate in our democracy. But when it comes to term limited candidates running again, it becomes murky if they are serving their community well and it’s up to the voters.

“I think that it’s healthy. It’s good to get new voices, fresh faces. It’s more inclusive. It’s more opportunities for people. But as long as it’s someone that the constituents are willing to put there, the voters wanna have that person represent them, and they think that’s the best person, I think that decision is gonna be made at the polls,” Hunter said.

Subscribe to receive the NYC Politics Newsletter directly to your email.

Next PostCandidate Video of the Week: Khari Edwards Candidate for Brooklyn Boro President