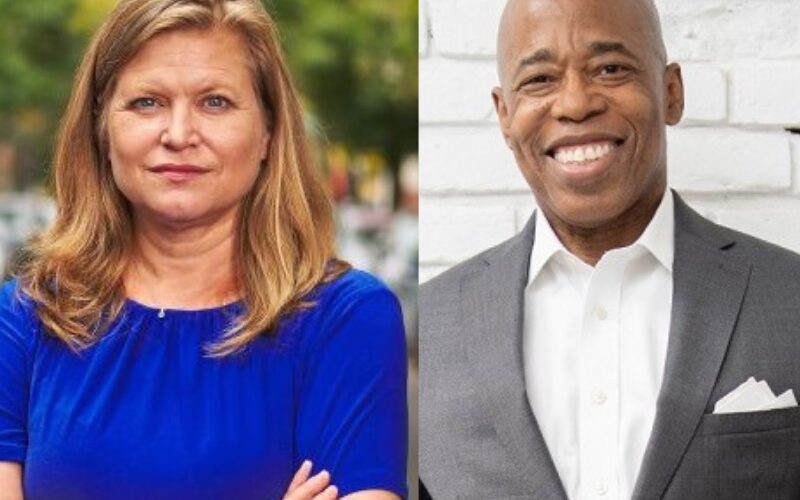 As the NYC Democratic race for Mayor heats up, candidates are landing more crucial endorsements. Two of New York’s biggest newspapers, The New York Times and The New York Post handed their coveted endorsements to Kathryn Garcia and Eric Adams. This was a big snub for Andrew Yang who had been the top contender since he got in the race, until recently when a new poll found Eric Adams in the lead.

The next Mayor will face a lot of challenges in the coming months and years as the city comes out of the pandemic. The New York Times editorial board had that in mind when they decided to throw their support behind Kathryn Garcia.

In their editorial endorsing Garcia, the New York Times Editorial Board said among all the candidates running for mayor, Garcia is the one who best understands how to get New York back on its feet and has the temperament and experience to do so.

“Even as the immediate crisis needs to be vanquished, this great city also needs a mayor who will make progress on persistent problems like transportation, housing, education and poverty. The city requires someone who can take charge right away, with fervor and confidence. Ms. Garcia has our endorsement in perhaps the most consequential mayoral contest in a generation,” said the board members.

The New York Times editorial board, a group of opinion journalists whose views are informed by expertise, research and debate said, voters may not know much about Garcia, touting her as a go-to problem solver in City Hall for the past decade.

“A confident, gravelly-voiced woman who ran an overwhelmingly male Sanitation Department. She has a zeal for making government work better.”

The Editorial Board also noted that Garcia was the one who got things back up and running at the Department of Environmental Protection under Mayor Michael Bloomberg when swaths of New York City lost power during Superstorm Sandy, knocking out the city’s wastewater treatment systems. Garcia upgraded the Sanitation Department and New York City Housing Authority under Mayor De Blasio.

“When she arrived at the Sanitation Department as commissioner in 2014, snowplow routes were still maintained on paper. Ms. Garcia modernized the system, finally allowing the agency to track snowplows in real time through the city’s 19,000 lane miles. She cut traffic from commercial garbage trucks in half, making streets quieter, safer and less polluted.”

“In 2019, in the wake of a lead paint scandal that sickened hundreds of children living in public housing, Mayor Bill de Blasio tapped Ms. Garcia to lead an overhaul of the New York City Housing Authority. That summer, childhood lead poisoning fell by 21 percent from the same period the year before,” said the board.

Responding to her endorsement, the Ex-Trash Chief said that she was thrilled and honored to have the endorsement of The New York Times and that her campaign has the momentum to win. “Now let’s go get it done,” said Garcia.

Pointing to his 22 years of service as a NYC Police Officer, the publication said Adams will use his experience to crack down on guns and crime and work with the NYPD. “The public wants officers who are more engaged with residents and properly trained to deal with tense situations. Adams would reinstate an anti crime unit to crack down on guns and gangs. He’d also push Albany-where he served as a state senator, to reform the no-bail law to allow for judges’ discretion to lock up dangerous, recidivist criminals,” stated The New York Post.

This endorsement, from a conservative paper owned by Rupert Murdoch however, comes with some baggage for Adams at a time when he is gaining momentum in the polls. His opponents are planning to hammer him on his Republican past.

As they prepare for their first televised debate on Thursday night less than six weeks to the June 22 Primary, people involved in the prep sessions who spoke on condition of anonymity told POLITICO that they are testing how to effectively hit Adams for his years as a registered Republican, from 1995 through 2002.

Adams also got the backing of The Amalgamated Transit Union (ATU) Locals 1181, 726, 1056 and 1179, the largest labor union representing transit and affiliated workers in the United States and Canada, with nearly 200,000 members. Endorsing him together in Castle Hill, Danny Casella of ATU 726 in Staten Island said this is the first time that all the ATUs have gotten together and endorsed the same candidate because Adams is the man and they will go all the way with him.

Mark Henry of ATU 1056 said Adams is a New Yorker for New York and is with their union. “He has a solid plan for New York. Bold initiatives when needed. A unifying voice willing to put the agencies together to work. He’s also in line with our core values as transportation people here in New York City,” said Henry.

“Queens Women for Eric Adams” held a rally at Springfield Park in support of Adams. They included five elected officials. Calling Adams the son of Queens and of a single mother who cleaned houses. The women said he’s the candidate for all communities who’s going to bring our city together.

Meanwhile, Dianne Morales picked up a bunch of endorsements. The Working Families Party-WFP passed on to Maya Wiley and Morales the endorsement they revoked from Scott Stringer due to the sexual harassment allegations made against him.

Morales, who has been inching up in the polls, was also endorsed by Empire State Indivisible-a high-profile activist group that helped Democrats win the state Senate in 2018, and the Muslim Democratic Club of New York.