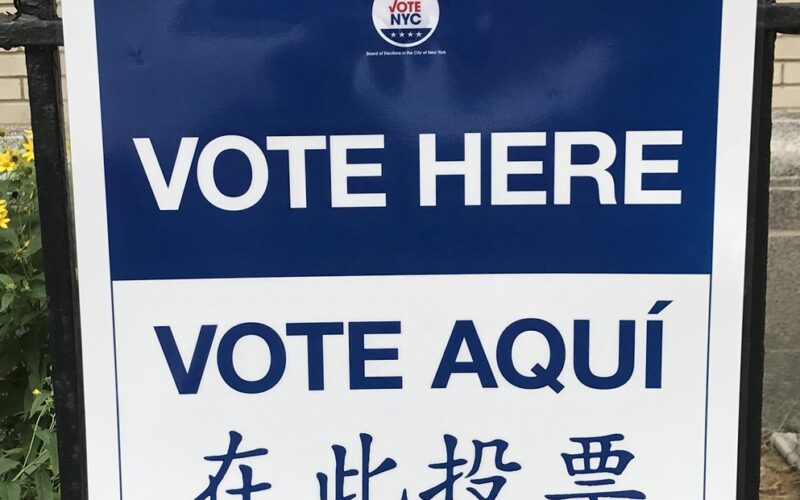 The Civic Engagement Commission (CEC) will be providing language assistance services at select poll sites during the upcoming election. Translation will be provided in the following languages: Arabic, Bengali, Chinese, (Cantonese, Mandarin), French, Haitian Creole, Italian, Korean, Polish, Russian, Urdu, and Yiddish. This program will run on the last weekend of early voting (June 19th and June 20th) and on Election Day (Tuesday, June 22nd). A full list of sites and dates served can be found at: www.participate.nyc.gov.

“The New York City Civic Engagement Commission is deeply committed to ensuring that all New Yorkers, regardless of what language they speak, are able to vote in our elections. Voting is an important part of civic engagement, and we want to make sure that this June, everyone can make their voices heard at the polls.” – Dr. Sarah Sayeed, Chair & Executive Director of the New York City Civic Engagement Commission.

The Commission’s language assistance services are supplemental to the interpretation that is provided by the Board of Elections under the Voting Rights Act, which covers Spanish citywide and Chinese, Korean, Bengali, Punjabi, and Hindi in certain counties. The Commission’s poll site selection methodology utilizes data from the most recent U.S Census Bureau’s American Community Survey as well as data from the NYC Board of elections to identify the poll sites that will serve the greatest number of voters in the agency’s program eligible languages.

It is important that all New Yorkers know that they have the right to bring an interpreter with them to the voting booth. This may be a friend, family member, or poll worker (just not an employer or union rep).

The Civic Engagement Commission was created through the 2018 Mayoral Charter Revision Commission. Its mission is to promote civic engagement in order to enhance civic trust and strengthen Democracy, particularly for those who are underrepresented or have limited access. CEC’s poll site interpretation is one of its core charter mandated programs.

“It is crucial that we educate and empower New Yorkers to be active participants in their communities, economies, and elections. The June primary will be one of the most consequential in decades, and all New Yorkers must be able to participate regardless of their language access needs. The Civic Engagement Commission’s interpretation services will help to make sure that this election and our democracy is truly inclusive and accessible for all.”  – Phil Thompson, Deputy Mayor for Strategic Policy Initiatives

Building a just political system means making sure that everyone’s voice is heard, no matter what language you speak,” said May Malik, Deputy Commissioner of the Mayor’s Office of Immigrant Affairs. That’s why the poll site language assistance program is vital to supporting immigrant New Yorkers and strengthening our democracy. As we prepare for the June primaries, we are proud to work with the Civic Engagement Commission to ensure that NYC voters know where the City is providing poll site language assistance and that they have a right to bring an interpreter with them into the voting booth.”

“Voting is a hard-won right, but the act of voting should not be hard. Language access is key to ensuring voting is truly accessible in New York City. We applaud our partners at the Civic Engagement Commission for their crucial efforts to bolster language assistance at poll sites in eleven additional languages. This June primary will shape the future of our city and we must work to ensure that every New Yorker – regardless of the language that they speak – has a voice.”  Laura Wood, New York City’s Chief Democracy Officer

“Millions of New Yorkers who speak a language other than English at home will now have access to the interpretation services they need to exercise their right to vote. We know that our city is stronger when all New Yorkers can fully participate in our democracy without undue barriers or burdens,” said Murad Awawdeh, Executive Director, New York Immigration Coalition. “The poll site interpreters program run by the Civic Engagement Commission is a success that we hope will be expanded in the upcoming budget.”

“There’s nothing more fundamental than the right to vote and New Yorkers deserve accessible, accurate language and translation services. These critical language access services can increase access to the polls, so that all New Yorkers can vote independently, confidently, and securely.” – Roberto Perez, Commissioner, Mayor’s Community Affairs Unit.

“Having grown up witnessing the barriers faced by Russian-speaking New Yorkers in exercising their right to vote, I am proud to have proposed and worked with the de Blasio Administration on the first supplemental poll site translation pilot program in 2017. Under the stewardship of the Civic Engagement Commission, the program has gone from 2 to 11 languages, and increased the number of covered poll sites tenfold. The Voting Rights Act is a floor, not a ceiling, and the incredible work the Civic Engagement Commission is doing ensures that language access is not an obstacle to voting, from producing translated educational and know-your-rights materials to providing poll site interpretation.” – Council Member Mark Treyger, New York City Council

Previous PostFireworks Erupt At First In-Person NYC Mayoral Debate As The Eight Candidates Make Their Case to Voters. This is What Stood Out.