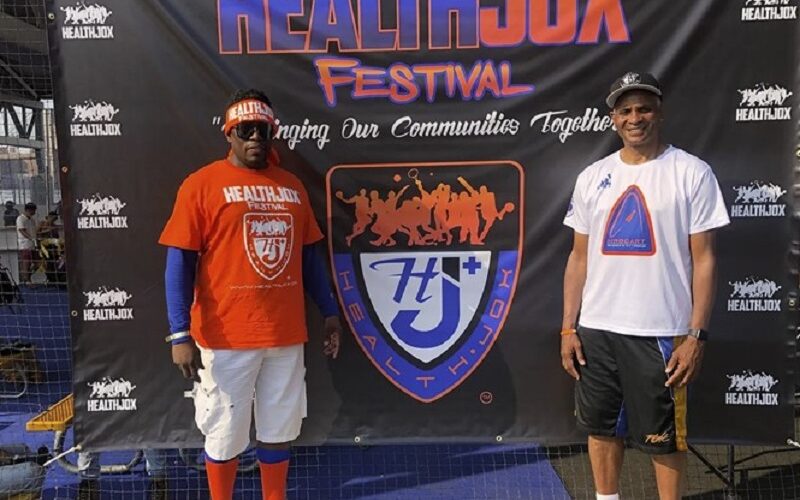 On August 25, 2018 Dewry DuRoi Bradford launched the 1st annual HealthJox Festival at Kaiser Park in Coney Island Brooklyn, NY.  Partnering with the Brooklyn Borough President, Eric Adams and the PSAL High School Basketball Commissioner for Brooklyn, Coach Ted Gustus, HealthJox was born.  During that day, HealthJox received a Citation from Brooklyn Borough Hall along with Coach Gustus and the founder of the Coney Island Community Council, Joseph Packer.  HealthJox also partnered with the United States Tennis Association who donated tennis rackets and balls for the event.  It was a full day of tournament basketball games, tennis clinics, soccer clinics, track clinics and the introduction of a new sport created by Coach Ted Gustus called AirOdart, (which is badminton but with your hands instead of a racket).

In July 2019, HealthJox Festival expanded to a 2-day festival at Brooklyn Bridge Park: Pier 2 and Kaiser Park: Coney Island.  The Brooklyn Nets and Tre21/GameOver partnered on the basketball side to provide free basketball clinics for the Community. As an added attraction, Coach Ted Gustus, along with ESPN’s number one street baller, Jackie “BlackJack” Ryan and sensational youth ball handler Qmar “The Promise 1” Stroman demonstrated their skills while conducting basketball clinics 10 am-12 noon.

In 2020, in order to continue the work in the communities of Brooklyn, Dewry DuRoi Bradford had to make the executive decision to reposition HealthJox and how it reaches its target market.  The impact of the COVID-19 pandemic reached far beyond the medical implications and has wreaked havoc on every aspect of people’s lives. In keeping with their mandate to educate and empower community members trying to navigate this environment, HealthJox Festival 2020 has been moved from outdoor event to a virtual platform. Dewry DuRoi realized that there was actually another pandemic plaguing America and abroad… the mental health pandemic.  He set out to combat this very issue.  He found that 20% of youth have admitted to thoughts of suicide and he needed to make some inroads into addressing these issues in the Community.  The Brooklyn Borough President issued a Citation for the work that Dewry DuRoi has been doing in the borough of Brooklyn.  Bishop Lestor Bradford recieved a Citation from the Brooklyn Borough President for his missionary work in the Community as well.

HealthJox also partnered with the Brooklyn Borough President, Eric Adams who shot 2-commercials.  Executive produced by Dewry DuRoi Bradford and Naomi Stewart, the HealthJox Virtual Town-hall Meeting was hosted by Coach Ted Gustus and Dr. Faith Brown along with a panel of 5 orators including Bishop Lester Bradford of Exousia Cathedral, Holistic Psychotherapist – Nfr KaRaa, Joseph Watson – regarding Moentorship, Fashion Designer & Jewelry Artisan – Phil Harris – personal Life Story and Nigel Caldin – focusing on Financial Literacy, to produce the 1.5 hour Virtual Town Hall Meeting to discuss what Dewry DuRoi calls the #MentalHealthInitiative.  This event was held during the evening which was designed to help lead the community in navigating the balance between the unique psychological, emotional, spiritual and economic concerns that are specific to life during a global pandemic. This part of the zoom meeting not only included the live conversation with their experts, but also interacted with audience comments for the question & answer session at the end.  Special thanks to our Engineers: Avril Ives – the first investor of HealthJox, Kevin Logan, Cosmic Divine and location host Eric Hicks for housing the Virtual healthJox Festival at the Brooklyn Stuydome located at 312 Kosciuszko St. Brooklyn, NY, 11221.

Next PostEarl Monroe New Renaissance H.S. Opens in the Bronx With NBA Support