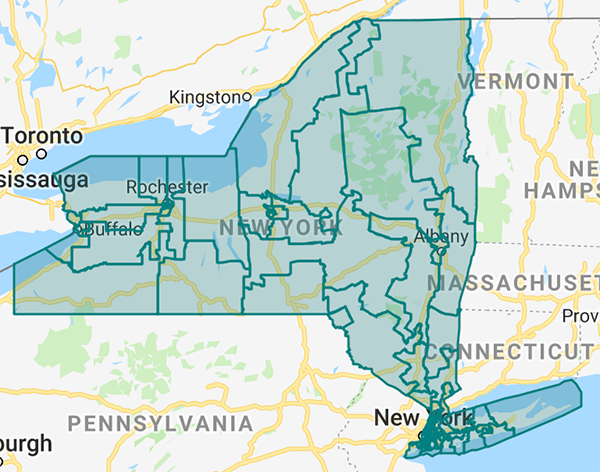 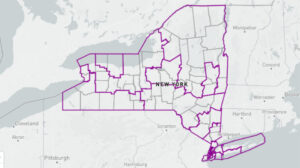 Democrats have been in a state of panic since a Steuben County judge, Patrick F. McAllister approved New York’s final redistricting electoral map. It drastically changed the landscape of the 2022 Congressional races, throwing the midterm primaries into uncertainty for Democrats. It was a big blow that threw Democratic candidates into chaos and confusion with many scrambling to anchor themselves on any seat they could grab.

The maps, proposed by special master Jonathan Cervas, a fellow at Carnegie Mellon, led to 21 districts where Democrats would have an edge based on their performance in past elections. But that edge is extremely slim in at least five of these seats, leading to multiple races that will likely be considered toss-ups. In a couple of others, a Republican upset is far from unlikely.

In  New York City, the new map set up at least two pairs of awkward Democratic primaries pitting longtime party incumbents against each other in heavyweight matchups. Those include a battle for parts of Manhattan between Democratic veteran Reps. Jerry Nadler and Carolyn Maloney. After serving together in their neighboring districts for 30 years, Maloney and Nadler who were both elected in 1992 and rose through the ranks to become powerful committee chairs are facing off in what has become an ugly matchup.

The congressional map, drawn by a court-appointed expert, pulls together Nadler’s Manhattan’s Upper West Side, and Carolyn Maloney’s Upper East Side. Cervas decided to end the decades-long practice of splitting Manhattan on an east-west basis. Joining these two seats created an open one featuring the lower half of the island joined with parts of Brooklyn.

Another high profile awkward situation created by the maps is in Brooklyn where Democratic Reps. Hakeem Jeffries and Yvette Clarke both live in a new CD-9. Neither lives too far from a neighboring CD-8 that contains parts of Bedford-Stuyvesant, Canarsie and Coney Island  and Represented by Jeffries.

Both the Democratic and Republican primaries for the 9th District were canceled so Democratic incumbent, Yvette Clarke and Menachem Raitport who is representing the R/Conservative Party and ran against Antonio Reynoso for Brooklyn Borough President in the 2021 local elections will face each other in the general election on November 8.

Meanwhile in District 8, incumbent Hakeem Jeffries is up against newcomer Queen Johnson in the Democratic primary on August 23.

Redistricting also caused a stir in the 17th District. Rep. Mondaire Jones, a gay Black freshman progressive who has represented the 17th Congressional District since 2021 is now running in New York’s 10th Congressional District. Mondaire is running in a crowded field that previously included former New York City Mayor Bill de Blasio, but who later backed out due to lack of support.

Now, Alessandra Biaggi who has represented District 34 in the New York State Senate since 2019 is running in this primary against Sean Maloney to represent the 17th Congressional District whose boundaries shifted as a result of redistricting. ​​According to Axios‘ Andrew Solender, “Maloney fueled anger from the left by running in a redrawn district mostly represented by Mondaire.

While Republicans celebrated calling it a victory for democracy and a final end to the “Democrats’ scheme to rig the election” as state GOP Chair Nick Langworthy called it, the new map set in motion a flurry of campaign activity among Democrats. While some candidates quickly scrambled for positions in critical seats, others rushed and reset their campaigns.

McAllister, who struck down the new district lines by Democrats, said the maps, drawn every 10 years after the latest U.S. census count, were unconstitutionally and politically drawn by the Democrat-controlled state Legislature. He said the maps are “void and not usable,” agreeing with Republicans who argued that the official gerrymandered the congressional lines to benefit Democrats.

The court also found the Democrats acted with partisan intent and violated a constitutional amendment that tasked an Independent Redistricting Commission with drawing nonpartisan maps.

“This entire situation is because the state Democrats decided to violate the constitution and enact an illegal redistricting. This can be laid all at their feet and be laid to blame but the courts saved us from an illegal, Democratic gerrymander,” said John Faso, a former Republican Congressman from the Hudson Valley involved in the lawsuit. .

With the maps upheld by the judge, Democrats are crying foul. Responding in a blistering statement, Rep. Hakeem Jeffries who is Chair of House Democrats and represents Brooklyn and Queens said “the map prepared by an unelected, out-of-town special master and rubber-stamped in the dead of night by a partisan Republican judge in Steuben County is a constitutional travesty.”

Congressman Nadler also released a statement saying the new lines violate NYS constitutional requirements. Days later, he released another statement stating his resolve to run to represent the people of both the Upper West and East Sides.

Meanwhile in her statement, Maloney said she is “not scared of a fight,” noting that most of the new district overlaps with her old one. “Regardless of who’s jumping into the race with our new maps, I know I’m the right leader for the people of New York’s 12th district,” she said. “Too often, qualified and accomplished women have been told to stand aside for the sake of men’s egos. But I have a lifetime of experience standing up to powerful men,” Maloney said.

Both Reps Mondaire Jones and Jamaal Bowman complained that the maps are meant to reduce the number of Democrats in Congress. Jones said, “The final maps are the result of partisan politics, drawn by an out-of-state Republican court appointee who has shown utter disregard for cultural, social, and economic communities of interest.” Meanwhile, Bowman said redistricting is meant to create congressional districts that keep communities of interest together but unfortunately, the map splits NY-16’s historically low-income Bronx communities into three congressional districts.

The state Legislature started drawing the maps in January after the state-sanctioned Independent Redistricting Commission, created following a change in the state constitution in 2014, failed to agree upon a set of bipartisan maps. The hope among good government groups for the creation of the IRC was to take politics out of the map-making process and avoid partisan gerrymandering.

Unlike the previous map drawn by Democrats, the final one highly favors Republicans. Maps drawn by Democrats in February would have made their party the favorite in 22 of the state’s 26 seats, with only a small handful of the seats having even the potential for upsets. Those were thrown out by New York’s top court and the map-making process handed to Steuben County Supreme Court Justice Patrick McAllister and special master Jonathan Cervas.

The redistricting maps for New York’s 26 congressional districts will play a crucial role in whether Democrats can hold on to the House in the midterms. Sean Patrick Maloney suggested there could be further legal action, meaning the saga of New York’s maps may not be over quite yet. “Unfortunately, this final map flouts the clear commands of the New York constitution and causes real concern under the Voting Rights Act,” Maloney said in a statement. “In the coming weeks and months we will continue fighting to get fair maps that reflect the will of the voters of New York,” he added.

Not only democrats got hit by the redistricting maps. New York taxpayers are bearing the brunt of two separate primaries.

We look forward to seeing how this all plays out in both the August 23 primaries and the general elections on November 8.