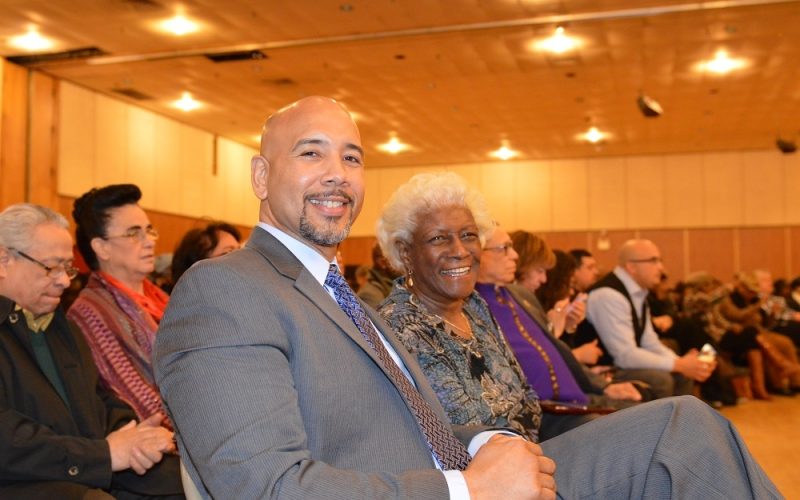 A chilly and overcast April Fools’ Day didn’t prevent scores of Bronx-area seniors from lining up in front of Dreiser Loop Community Center in Co-Op City. The early bird gospel fans were eagerly anticipating the inaugural Bronx Gospel Concert, a free event presented by the Office of Bronx Borough President Ruben Diaz, Jr. Billed as “Generation Fest: Bridging the Gap with Music,” it was an afternoon of inspirational song, dance and praise, filled with soul-stirring music and energetic performances.

With assistance from his wonderful staff of “Senior Services Divas,” led by Director of Senior Services Larcenia Walton, the borough president himself greeted attendees on line, stopping to pose for pictures and give hugs as he thanked many of them personally for coming out. Diaz’s office received over 850 RSVPs through local senior centers, and the venue seating was nearly at capacity when it was time for the program to begin.

After a welcome by the day’s emcees, Elder Nitisha Moore of Relay for Life, and local radio personality Dr. Bob Lee of WBLS-FM 107.5, Deputy Bronx Borough President, the Honorable Aurelia Greene, led the invocation, a reading of Psalm 145. During his opening remarks, Diaz, a self-described “preacher’s kid,” said: “…one of the best ways to connect with the Lord is through music…we’re gonna have a good time today!” He encouraged every audience member to get up out of their seats and dance, if the spirit of the music hit them. And indeed, the enthusiastic senior crowd did just that, from the time the first act hit the stage!

During intermission, concert-goers munched on complimentary “goody bag” snacks while they perused the sponsor tables, where they were able to shop for fashions and accessories with Etsy shop Diana’s Tees, and Bronx-based Sasi Designs.  Among the many health care providers in attendance was AlphaCare, a Magellan Health managed long term health care company. Beatrice Morton, AlphaCare Community Outreach Manager, noted: “Today is remarkable! I am overwhelmed at the size of the crowd, but I love gospel music, too, so I know they’re here for an uplifting good time.” She added her appreciation for the recognition AlphaCare received from Ruben Diaz prior to the start of the concert, saying “…this is an impressive first event; AlphaCare looks forward to many more successful partnership opportunities in the Bronx.”

One woman thoroughly enjoying the program was Eva Lazaar, a ReServist (Retired Seniors in Service) outreach specialist for the Parkchester Empowerment Program. Eva learned about the event on Facebook, and knew she wanted to stop by. “Programs here [at Dreiser Community Center] are always nice. There was an interfaith breakfast here not too long ago. I love inspirational music and song, and today’s event brought out the best of the Co-Op City community.”