Home Bronx Who Is 2021 Mayoral Candidate Ray McGuire And Why Should Anyone Vote for Him?
BronxBrooklynFeaturesManhattanNYC Voter NewsQueensStaten Island

Who Is 2021 Mayoral Candidate Ray McGuire And Why Should Anyone Vote for Him? 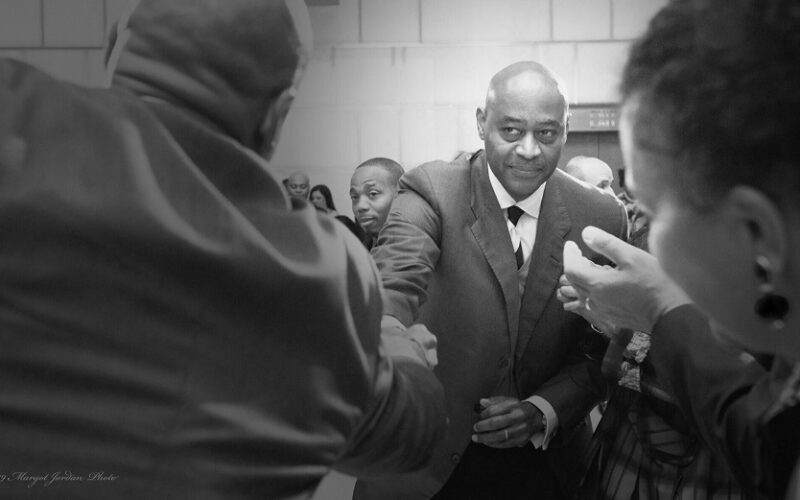 Many people might not know Ray McGuire, so we thought we would post his bio so you can get to know him, and make your on decision on whether or not he deserves your vote. We will post bios from other candidates as well, and will post one on one interviews.

Watch the Video and read his full bio below

Raised by a single mother and his grandparents in Dayton, Ohio, Ray McGuire and his two brothers didn’t have much growing up. But they had family, faith, church, a loving home and a deep-seated belief that education was their ticket to anywhere.

“I never knew my father. He never acknowledged me, a sorrow I share with far too many in the neighborhood.”
Even without a father, family was everything to Ray. His mother, Wiletha McGuire, was, and to this day is, a powerful force in Ray’s life. When she wasn’t taking care of their family she worked as a social worker.

Ray saw his grandfather working in a factory during the week, as a janitor on the weekends and serving as the head deacon in his church. His grandmother was the head of the church missionary board. His grandparents tried to “save souls through faith.” Through his mother and grandparents Ray absorbed the values of working hard, believing in yourself and looking out for other people who need a hand along the way.

Ray McGuire as a young adult, wearing a plaid suit, smiles and walks with his grandmother.
When a 5th grade teacher saw something special in Ray, he got a scholarship and his family dug deep, sacrificed and borrowed money so Ray could go to a better school. Every day, Ray walked a mile or so and took a bus to get to a school where few others looked like him.

“By 11th grade, I was president of the student council, had a 4.0 GPA and was averaging 28.0 points a game on the basketball team (solid form, decent elevation, slight reluctance to pass).”

When a teacher challenged Ray by saying, “If you are as good as they say you are, why don’t you go test yourself against the big girls and boys in the East?” Ray, then 16, took a plane by himself to Connecticut. From there, he took a Greyhound bus trying to find a place “to test himself” and get a better education. With another scholarship, more student loans and more borrowed money, Ray decided on Hotchkiss, one of the best prep schools in the country.

Ray went on to Harvard, becoming the first in his family to graduate from college. He then enrolled in a four-year JD/MBA program at Harvard. After earning degrees in law and business at the same time, Ray went to New York for a job on Wall Street.

“I couldn’t afford a place to live in the city, but a friend’s parents let me stay at their apartment while they were away. They didn’t charge me, but I had to pay all the utilities so, needless to say, I spent a lot of time with the lights off.”

Like so many New Yorkers, Ray came to New York wide-eyed with a mix of hope and fear, confidence and doubt. From day one, Ray knew New York City was where he wanted to build a better life for himself, but he didn’t know how to make it all happen. He was awed and inspired by the city’s energy. For a kid from a small city in Ohio, the sheer size and speed of New York was intimidating. Ray felt like an outsider and, in the business he was going into, he was an outsider.

“Almost no one in Wall Street corporate finance looked like me. I was reminded of what my mother and grandparents would say to me—that I had to work twice as hard to be considered half as good. I was one of the first but, since then, I made sure I was never the only.”
Over the last 36 years, Ray has led businesses responsible for generating $20+ billion a year in revenue supporting public and private sector clients around the world. He recruited and built teams to do multi-billion-dollar deals, and he advised the CEOs of companies on how to help their businesses grow, thrive and create jobs.

For the last 13 years, he was the head of global corporate and investment banking at Citigroup and the longest tenured head of investment banking in the history of Wall Street. Ray has personally originated and executed deals valued at over $650 billion while he also worked to make a difference.

As a Citi Foundation Board member, Ray helped the firm improve the lives of people in low-income communities. He also recently helped write a groundbreaking report on the economic impact of systemic racism. Throughout his career, Ray has served as a mentor to the next generation of corporate and civic leaders in New York. By mentoring people, Ray has held the door open for many others including those who grew up like him.

“I’ve been a have and I’ve been a have not. Today, I’m proud to be able to give back to my city and I feel fortunate to serve on a number of civic, charitable and educational institutions.”

When Ray wasn’t working, he was giving back to kids in New York City by contributing to their educational opportunities. For 30 years, Ray has been on the board of the De La Salle Academy. This small, independent day school primarily serves gifted students, many who live below the poverty line. Many of these kids commute every day, mostly by taking public transportation and sometimes for hours.

“They run the gauntlet of detractors and doubters back in the community, just like I did. I’m sure they hear their friends say they’ll never make it, like mine did.”

Ray has also given back to the city he loves by serving on the boards of the New York Presbyterian Hospital, the New York Public Library, the Whitney Museum and the Studio Museum in Harlem. He has also served on advisory boards for the Council of Urban Professionals, Sponsors for Educational Opportunities, Management Leadership for Tomorrow and others throughout the city.

Now, Ray is running for mayor to lead the city’s recovery as it deals with the loss of one million jobs and one in three businesses. Ray also knows the city was facing many problems even before this pandemic, and he wants to use his experience to help rebuild our economy and improve the lives of every New Yorker.

“New York is the greatest city on earth, but it is a city at risk—grave risk. The danger lights are flashing red. We’re facing a financial crisis unlike any the city has seen before. Too many kids who look like me or grew up like I did can’t make it. Too many people are out of work. No jobs. No city. I’m running because the same old political answers won’t fix that.”

Ray knows that racial and social justice are long overdue, and that New York has an opportunity to lead by example. He believes that a city built on diversity can be a city that leads the way on inclusion, opportunity and success. Ray knows we must address bad policing and rethink our approach to public safety while we also tackle inequities in housing, health and the myriad of other systemic issues holding New Yorkers back.

“Like so many other people in our city, I can wear a suit and be seen as a successful businessman in the eyes of the law. But, if I’m walking home from playing basketball with my children, I could easily be the next George Floyd. The fight for social and racial justice is one I take very seriously.”

With the COVID-19 crisis magnifying all of the city’s challenges and creating an economic crisis like none other, some are suggesting, “New York is over.” Ray thinks they are wrong. And he is ready to prove it by using his experience to rebuild our city’s economy, spark innovation, create and attract new jobs and still make the city more affordable and more equitable.

SUBSCRIBE to NYC Politics to receive important updates and breaking news in New York City political news that you care about.