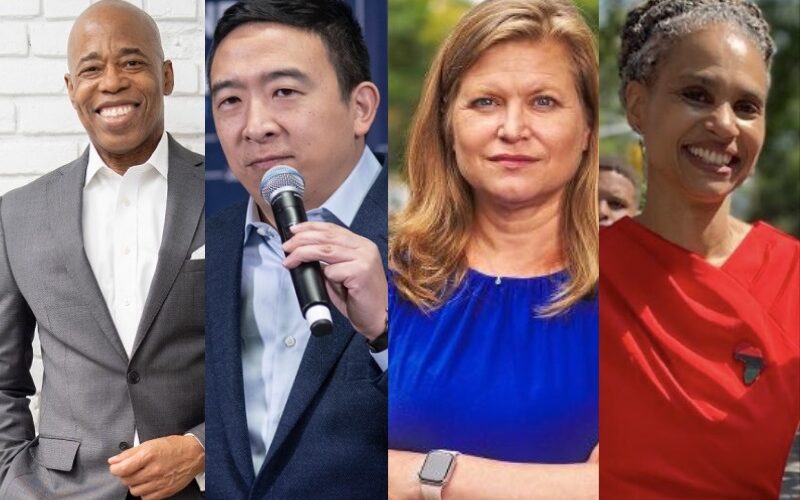 On the last day of campaigning before the June 22 primary election day, all eight Mayoral candidates crisscrossed the five boroughs trying to woo undecided voters. According to ABC7 Eyewitness News, among the top four candidates, Eric Adams is still in first place with 28 percent followed by Andrew Yang with 20 percent. Kathryn Garcia is third at 15 percent while Maya Wiley is in fourth place with 13 percent.

Another big endorsement that Adams picked up was from Queens Council Member Karen Koslowitz. Endorsing him at Queens Borough Hall, Koslowitz, one of the most respected Council Members in New York City who served under 5 Mayors and has more experience and institutional knowledge than any other Member in the City Council, said Adams has the experience to get the job done.

Meanwhile Wiley, who has been gradually gaining momentum in the polls in recent weeks, but still trailing Adams, won the backing of Keith Ellison, Minnesota Attorney General and former congressman who served as the Democratic National Committee’s deputy chairman and the first Muslim elected to Congress. The endorsement from the well-known progressive is a boost for Wiley. Wiley said she and Ellison agree that safety and justice don’t have to be in conflict, that they’re one in the same and that addressing the root causes of crime by investing in affordable housing and public schools, will keep our people safe. Wiley also cross-endorsed with City Council candidate Nikki Lucas from District 42, which covers East New York, Brownsville, Canarsie and East Flatbush.  They were both seen today talking to residents in East New York.

Meanwhile, Yang and Garcia, who don’t agree on a lot of issues teamed up to try to stop Eric Adams. The two candidates were campaigning together as they seek to gain momentum just before Tuesday’s primary. “Today, Andrew Yang and I are campaigning together because, what’s good about ranked choice is you can actually vote for what you are for, not for what you are against. That you can disagree with people and have them be a part of your ballot,” Garcia said on Saturday. Eric Adams was not pleased with the strategy calling it racist and accusing Yang and Garcia of teaming up against him.

Garcia, who had been on Adam’s heels slipped to third place while Yang leaped back to second place. It is clear that whoever wins the democratic primary is sure to become mayor of New York City as Democratic voters outnumber Republicans by over 6 to 1.

With ranked-choice voting being used in New York City for the first time, it is considered a complicated process and will take some time before voters will know who will be taking Mayor de Blasio’s place at Gracie Mansion. Unofficial results will be available at the end of the night on election day, but official results are expected by July 12.