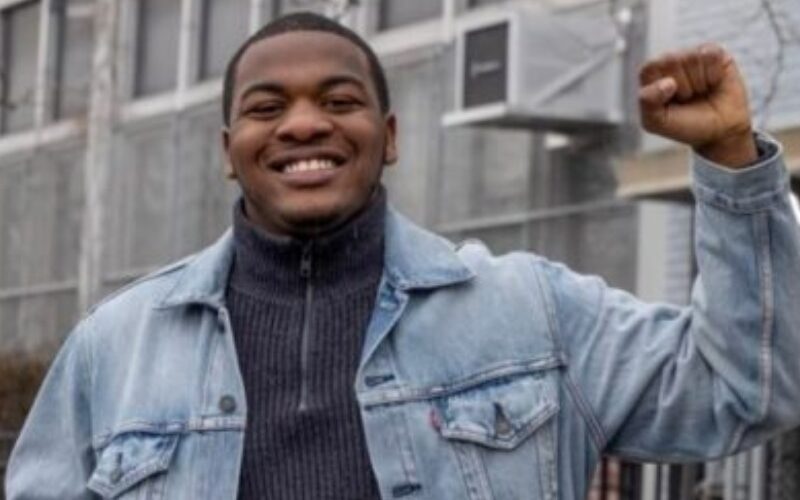 Former educator and activist, Tim Hunter is running for New York State Assembly Democratic Primary to represent the 43rd Assembly District in Brooklyn. At just 23 years old, Hunter is confident that he is ready for public office. “I have always been told that I should wait a little longer my whole entire life. I believe that democracy is not a spectator sport and if you want true change, you should throw your hat in the ring and fight for it,” he said.

Hunter, who ran for public office for the first time in February this year in a special election for the same Assembly seat said he is running to ensure that the people of the 43rd Assembly district have true progressive representation in Albany.

“Our district deserves representation that will ensure housing is a human right, tax the wealthiest billionaires in NYS, and will say no to money from the fossil fuel, real estate industry, or any other corporations that prioritize profit over New Yorkers,” the CUNY alum said.

He added that his core vision is to assemble a coalition of activists and organizers that are willing to fight for a more equitable and just New York for all.

“I believe that when we stop electing politicians, and start electing community leaders and organizers, we will finally achieve a government that works for the working-class people. I have always been involved in the fight for social, racial, and economic justice in New York State and I hope to run a campaign that will work to mobilize and grow civic engagement in the community throughout the entire electoral process. The NYS Assembly gives me an opportunity to engage voters in the governing process through Albany, and fight for their best interests,” the community organizer said. 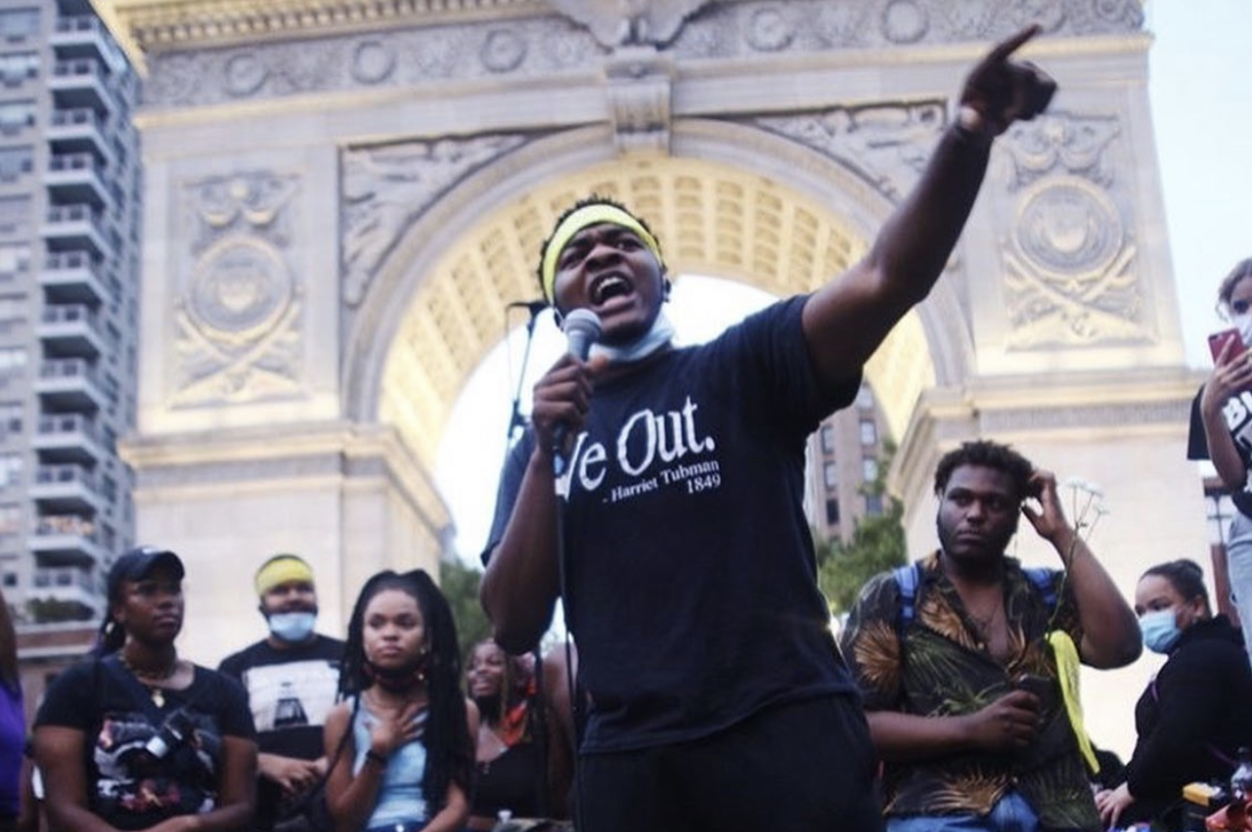 Hunter, whose mother, a teacher herself, had a deep impact on his life and inspired him to become a public servant said some of the issues that ignited his desire for public office stemmed from his experiences as a student and educator while teaching in and attending public schools across the city.

“I realized quickly that so many of the students in the schools that I taught in came from similar backgrounds as me, and a lot of them were battling food insecurity and housing instability all while trying to stay focused on their studies. These issues weighed heavy on my mind on my long train rides from work to school as I too was still a student, taking night classes at CUNY’s New York City College of Technology pursuing my bachelor’s degree in education. However, I realized that our public universities were no different, our CUNY schools suffered from lack of investment from Governor Cuomo which led to libraries closing earlier, tuition hikes occurring every year, and budgets for student support services being slashed. I felt compelled to do something about the inequities that my peers were facing so I joined student government to make a difference on my campus. We organized CUNY students to speak at press conferences and rallies to advocate for more support for our university,” the Baruch College grad said.

Hunter was eventually elected to chair the University Student Senate and testified at state budget hearings about the issues of the rising costs of attendance at CUNY, the need for food pantries on campuses, the lack of support for students with disabilities, and the need for a New Deal For CUNY.

The former State Assembly employee who worked for Assemblymember Diana Richardson during the peak of the COVID-19 pandemic and a newcomer in the process is facing an uphill battle against the highly favored and experienced incumbent Brian A. Cunningham and Jelanie Deshong of the Working Families Party, Democratic Party. But that doesn’t intimidate him. Hunter said he is focused on fulfilling the empty promises that politicians have made to his community that he knows firsthand from his firsthand experiences.

“Our campaign is focusing on a core set of issues that include housing, education, and criminal justice reform. These issues have had a direct impact on my upbringing and are among the various issues that many voters in this district care about. As a renter, I understand all too well that all housing is not created equal. As a product of the NYC public school system, I believe that a student’s zip code should not determine the quality of their education. As a black man, I have seen friends and loved ones fall victim to the corrupt system that is meant to keep those that look like me behind bars without any support in our return to society. I am running to right these wrongs, as education, housing, and the criminal justice system have done more harm than good to many of the families in my district,” the activist said.

He added that running against experienced candidates is all about hustle. “I spend most of my days knocking on doors and calling voters. We must meet voters where they are at if you hope to win any election. We hope to outwork all our opponents on the ground, and that will be our path to victory,” he said.

Hunter said he will be focused on promoting a culture that is inclusive and aligned with the values and shared vision of his supporters and the district at large. Seth Kaplan, a supporter and longtime community organizer in Flatbush and Prospect Lefferts gardens, Brooklyn agrees.

Kaplan, who has known Hunter for a few months, said he saw him at the debate with the other candidates during the special election and immediately knew that Tim was the person he wanted to support. He said what he considers in a lot of the races that he gets involved in is nurturing and building candidates for the future.

“One of the reasons I am helping someone like Tim is that we must nurture and grow our future leaders. Another thing that is good about that. Not only are you building the next generation of leaders. It’s that you know these people and you know, one way to stay connected is to be connected when people start out and I particularly think that we have to encourage younger candidates. We have way too many people in politics that have been there a long time. We need new views. We need young people, you know, fresh ideas and energy.” Kaplan said.

He added that Hunter’s independent ideas also won him over.

“One of the things I saw in the debate with Tim is that he’s very independent. We want people that you know have strong conviction. A lot of people get elected to office and they get swallowed up by the Governor, the Mayor or their party and they lose their independence. They lose, why do we elect them in the first place. Some of them lose their way. Tim is somebody that’s gonna go and he’s gonna believe in what he believes and that’s what he’s gonna fight for. He’s gonna worry about his district and he’s gonna stick to what he thinks. What he believes. And I think that’s more important,” Kaplan said.

Aleah LaForce, a Hunter supporter who works on campaigns in government and currently volunteers on his campaign said Hunter knows his community very well, is extremely educated and well knowledgeable, very down-to-earth and is one of the most intentional and humble individuals. LaForce said Hunter caught her attention when he said he’s very big on community and not being a politician and that made her believe that he’s the one to address the issues in the district.

“I think housing equity is a huge problem and I do think his goals of helping directly as part of that is beneficial to the area as well as just continuing with fighting for education as a whole he’s really big on education as he has a lot of experience and he comes from an education background with his family with his mom specifically,” LaForce said.

Kaplan said residential tenants and commercial tenants are the two issues not being addressed in the district that he thinks Tim can help with. “People can’t afford to stay in their neighborhood. We also have businesses that are struggling. There are no protections at all for them. There are also a lot of vacant storefronts in the community which is not good for the community,” Kaplan said.

And how young is too young to run for public office? The 23-year-old whose supporters are members of the community who he said are tired of the status-quo and want real change, is not fazed by any chatter that he may not be ready for office.

“I have more legislative experience than many of our opponents, and I think that is what makes us most qualified to represent this district. Even though I am 23, I am uniquely poised through my experience in the legislature to make an impact on day 1 in the NYS assembly, and I am looking forward to continuing to serve this district,” the young organizer said.

“I find that people, the longer they are out there, the more that they learn the wrong things. And so, I feel like, let’s send someone like Tim. He’s not cynical, he’s not burned out. He’s not frustrated. He is ready to go,” Kaplan added.

LaForce agreed that age should not determine whether you are ready to hold office. “I would say experience and he is obviously, his life and college experiences, serving his community. I do think that his expertise and his heart for knowledge speaks to his maturity,” she said.

According to the NYS Board of Elections, you must be at least 18 years old to run for NYS Senate and NYS Assembly, 25 years to run for U.S. Congress, 30 years for NYS Governor, Lt. Governor, Attorney General, Comptroller, and U.S. Senate, and 35 years to run for President of the United States.

Hunter, who first ran for legislative office at 22 has some advice for young people who may look at him and aspire to also want to run for public office one day. “Running for office is not the only way for you to make change in your community. You can get involved in the county committee, or your local community board. Serving your community is not just about elections, it is about organizing and prioritizing the needs of the working-class neighbors. That is how true change is made,” the City Tech alum said.

Hunter has received endorsements from Jim Owles Liberal Democratic Club and Run for Something so far.