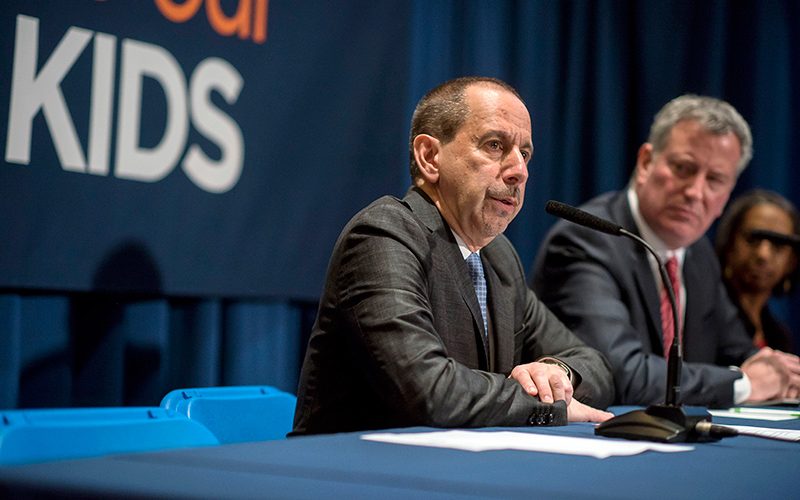 Hansell has built a reputation as a proven manager with a data-driven focus on improving outcomes for vulnerable populations, especially at-risk families and children. Hansell has worked at the national, state and local levels in child welfare and social services, including prior service in the New York City government in the Department of Health and the Human Resources Administration, in addition to his experience in the private and non-profit sectors.

“Our most solemn responsibility is to provide vulnerable children with the care and support they deserve,” said Mayor Bill de Blasio. “David Hansell understands this mission deeply – and that’s why I know he’s the right choice to lead ACS and implement an aggressive reform agenda focused on preventive services for kids and families. David has spent his career on the frontlines working with at-risk communities, and I have no doubt he’ll tackle this job with the same focus and intensity that’s defined his career.”

“David Hansell has dedicated his career to uplifting some of our most vulnerable populations, including at-risk children, low-income families, and New Yorkers living with HIV/AIDS,” said Deputy Mayor for Health and Human Services Dr. Herminia Palacio. “He’s a skilled manager with exactly the type of experience and vision needed to lead a complex child welfare agency like ACS. I know he’ll be a tenacious advocate for the welfare of children across the City, and couldn’t be prouder to bring him onto our team.”

“I am honored to lead ACS at this critical time, and confident that my long-term experience in government well-prepared me to strengthen ACS’ mission and programs,” said Administration for Children’s Services Commissioner David A. Hansell. “Under my leadership, ACS will continue implementation of needed reforms to better protect and serve our most vulnerable children and families throughout New York City.”

“David was a valued member of my original Senior leadership team at HHS in the Obama Administration,” said Kathleen Sebelius, former U.S Secretary of Health and Human Services. “During his tenure at the Administration for Children and Families, we took important steps to strengthen the Head Start program, enhance efforts to achieve permanency and stability for children in foster care around the country, and rescue hundreds of orphans imperiled by the 2010 earthquake in Haiti. These and many other accomplishments speak to David’s broad policy knowledge and proven management skills. I applaud Mayor de Blasio’s decision to tap him for this critical assignment.”

The de Blasio administration has invested over $122 million in new funding to strengthen the child welfare system. Currently, fewer than 10,000 children are in foster care – the lowest number in decades – due to better child protective investigations, more preventive services and improvements in foster care practices. During 2015, more than 46,000 children received preventive services, creating a universe of 22,000 families benefiting from preventive services during that year. In 2016, ACS hired more than 600 new Child Protective Specialists to increase staffing for those dedicated workers who carry out the critical work of responding and investigating reports of child abuse or neglect.

Hansell will begin his position at the Administration for Children’s Services on March 6, 2017.