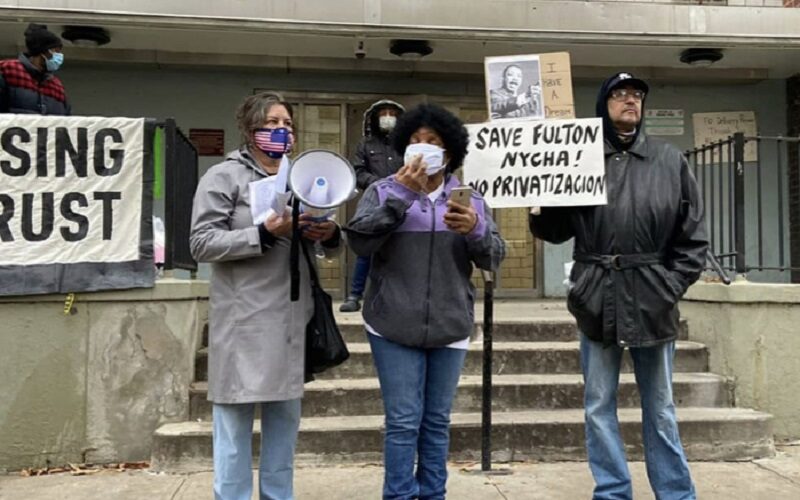 photo: Jackie Lara and other tenants of Fulton Houses speak at a rally in December 2020 opposing any privatization of their homes and demanding public investment

By Mary McGee and Jackie Lara

At the end of February, the final report outlining the Chelsea NYCHA Working Group’s recommendations for Fulton and Elliot-Chelsea Houses was released. While the report looks nice, the glossy presentation is really a distraction intended to cover up an undemocratic, coercive process that is attempting to lock us residents out of decisions about the future of our homes. We know this because we participated in the working group, and have been fighting for our homes and our futures since 2018 when plans for Fulton and Elliot-Chelsea Houses were first announced.

In fact, over the last two-plus years, we have reached out to elected officials, the media and our neighbors, held multiple rallies and press conferences, collected signatures from the majority of heads-of-household at Fulton Houses on a petition that opposes RAD and demolition and demands public investment through Section 9, sent a letter to HUD outlining our concerns about resident exclusion from the process, and more.

All the while, elected officials and tenant representatives, including our TA President Miguel Acevedo, have ignored and silenced us. This report is one more example of that. It hides the lack of resident participation, silences resident dissent, and continues to ignore alternative plans that residents put forth. We write this OpEd to set the record straight.

First, while nearly 5,000 residents stand to be effected by these plans, the working group plan lists 22 residents in total. That means, at best, only 0.4% of residents were involved in regularly discussing and devising this plan for our homes and our futures.

And really, this number is even lower as many of the resident-members listed only attended one or two in-person meetings from October 2019 to March 2020, while others attended but never spoke. Participation of resident-members dropped off even more once the meetings transitioned to resumed via Zoom due to COVID-19 (from September 2020 to January 2021). Only 2 residents from Chelsea and 7 from Fulton attended any virtual meetings.

Its vital to also keep in mind how little tenant representation there was on the three subcommittees they divided us into.

Moreover, there are four residents of Fulton Houses – including Jackie, one of the authors here – who were left off the list in the final report but participated in the working group sessions prior to COVID-19. It is unsurprising to see us excluded from this final list given that the group leaders tried to prevent us from participating in the first place. We had to lobby Representative Nadler to make sure we were admitted to meetings where the future of our homes was being decided.

Beyond the working group itself, the report overstates the group’s engagement with residents more broadly, while glossing over dissent and alternatives. For example, there were supposed to be three in-person resident meetings at Fulton Houses, but there was only one, in November, which the report discussed on page 11-12. And during that meeting, residents at every table stood up and said, “No RAD, No Demolition” and demanded 30% rent calculations. I, Mary, know because I was sitting next to Mr. Greg Russ repeating everything.

The same thing happened at the resident meeting held at Elliot-Chelsea. In addition, residents raised concerns about safety and security, and asked NYCHA to change the office manager due to lack of work from the office, maintenance, and grounds. None of these concerns have been addressed.

The second and last series of resident meetings were held on Zoom in December 2020. The Working Group claims 271 NYCHA residents participated, but these numbers are inflated. The working group had no way of knowing who a resident was, and at the Saturday meeting that I attended, there were only five residents on the call.

We also know, through talking with our neighbors, that holding meetings via Zoom presents real barriers for many of our neighbors. Many don’t have access to the necessary hardware, don’t have a stable Internet connection, or aren’t comfortable with digital technology, and this prevented many from participating in these meetings. This concern was so substantial that we wrote to HUD about it in November of 2020.

We also presented alternative plans to the Working Group which, like in the report, were more dismissed than addressed. Specifically, we worked with civil rights attorney Norman Siegel to create a plan for resident management. In February 2019, Mr. Siegel presented our 12-page, researched report to the Working Group who dismissed it immediately, and instead heckled him. When we and other tenants said that we wanted to discuss this plan in more detail, the group told us they would hold another meeting, but no meeting was ever scheduled and the plan was never seriously discussed.

There are other issues with the plan they’ve detailed that we could nitpick – like how how the contribution from the West Chelsea Affordable Fund dropped from $6 million to less than $2 million, and how $8 million is coming from City Council for upgrades to our steam system and playground rather than the new private manager, and how the flood resiliency infrastructure will only be implemented for new developments and retail, not NYCHA buildings.

However, the active silencing by the working group should be enough to stop any forward motion on their plans. This was not a legitimate or inclusive process and should not be how the future of our homes or the homes of any NYCHA tenants is decided.

We are calling on elected officials from across the city, and especially those on the Public Housing Committee, to denounce this undemocratic process and join us in demanding this plan be thrown out.

Moreover, we are calling for a complete halt to RAD across the city. We are hearing from tenants around the city, in converted buildings and buildings where conversions are expected, that tenants’ rights are being trampled. We stand in solidarity with these tenants and demand that our homes remain Section 9, that public funding at all levels of government immediately be allocated, and that pathways towards resident management be pursued.

Lastly – to our elected officials who sit on the steering committee, some of whom, like Public Advocate Jumaane Williams, who released a statement about how proud he was to have been a part of this process – shame on you for ignoring those that gave you the power you have.